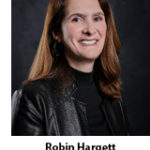 I am pleased to announce that Robin Hargett has been hired as the new Executive Director for ULI South Carolina. Many of you may know Robin who has been a part-time contractor for the District Council for the last four years, helping to start the UrbanPlan program in South Carolina, increasing member communication via newsletter communications and social media, as well as assisting with the management of events such as the Capital Markets Conference and Carolinas Meeting.

Robin has worked in residential development for over 20 years. Since 2011, Robin had her own consulting firm where she directed market and consumer research studies for the residential real estate industry, and also freelanced with other consulting teams for a variety of clients including developers, landowners, community associations and private clubs.

From 2008-2011, Robin was a Vice President with Permar Inc., a real estate advisory firm in Charleston, SC, where she directed an extensive array of research assignments including market feasibility and market opportunity analyses, and spearheaded the firm’s consumer research assignments. After a brief stint in documentary filmmaking in Washington, DC, Robin’s early professional career included several roles with global advertising giants J. Walter Thompson and Young and Rubicam in New York City.

Robin graduated from The American University in Washington, DC with a BA Visual Media from the School of Communication. She resides in Charleston with her husband, Andrew, two teenagers, two dogs and a cat. In her free time, Robin enjoys catching live music performances, a good autobiography, and all that the Charleston area beaches and surrounds have to offer. Also near and dear to her heart, for the past six years, Robin/Hargett Consulting has participated in the United Way Day of Caring, gathering and donating purses and toiletries for women in need through Neighbors Together, SC (previously TriCounty Family Ministries) “Pass the Purse” initiative.

Looking forward to her new role, Robin shares that “ULI South Carolina includes some of the best and brightest minds in our industry. It is an honor to continue to work with this special network of individuals to further the mission of ULI in South Carolina.”

Robin’s professionalism and commitment to the organization have been apparent to those who have worked closely with her over the past four years. We are excited to continue working with Robin as our new executive director and look forward to continued growth and innovation for our District Council.

Join us in welcoming the following new members who joined ULI in July, 2021. We look forward to seeing you at an upcoming event!